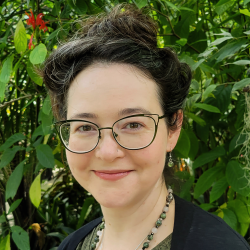 Food conditioning is an inevitable outcome when humans share space with wild animals. Bird feeders, flowerbeds, vegetable gardens and lawns are enticing to deer. And when the animals are seen as cute and innocuous the temptation to offer even more food on top of that grows.

Supplementary food is likely a key factor in why the deer remain on the Edmonton Ethane Extraction Plant land for much longer periods than usual. They could be getting a significant source of food from the small, fenced-off area that is farmed. This year’s crop is canola, which is a very high source of nutrition that is often sought out by wildlife — wildlife biologist Colleen St. Clair notes that in Banff, bears often gravitate to canola seeds.

And then there are the extras.

“Apples are their treat; from time to time I also bring them some oats,” says Daryl Matter, who works for the EEEP. “There’s other people that know of the deer in this area; they will come up to the fence and they will throw apples over the fence, or in the wintertime some of them even throw hay bales over. Some people actually ring at our front gate and say, ‘Hey we’ve got some apples for the deer.’ We’ve got a couple contributors that come in, in the fall time.”

He’s quick to point out, however, that the EEEP employees aren’t feeding the deer all the time because they don’t want to domesticate the animals. That’s the right impulse, says St. Clair.

“People do like to help other individuals, including other species,” she says. “It’s a beautiful thing; one doesn’t want to be too harsh with it. But, unfortunately, food conditioning almost always leads to a bad place for wildlife — almost always. And it’s been shown for deer dozens of times.”

Animals subjected to food conditioning can experience a variety of problems, including increased aggressiveness, concentration of disease, attraction of other wildlife, loss of natural behaviours and even loss of the ability to forage adequately, so that they become partially or wholly dependent on supplied food. Alberta has experienced an increase in these cases: A number of wolves have been killed in Banff National Park this year after becoming habituated to human food, and an aggressive, food-conditioned black bear trashed a campsite and forced the closure of Castle Mountain campground in June. Wildlife experts expect the number of similar cases to keep increasing.

It’s unlikely that predators like wolves and bears would ever end up living in a highly urban environment, as the EEEP deer have – we habitually relocate or destroy predators that have been food conditioned to stay near urban areas, due to their perceived threat. Deer are often overlooked in discussions about food conditioning because they aren’t considered dangerous, but that’s not always the case. Several communities in British Columbia have resorted to culling deer in order to deal with the problems of local overpopulation, including increased deer-vehicle collisions, attacks on pets and aggressive behaviour towards humans. Since 2011, the communities of Oak Bay, Cranbrook, Invermere, Kimberley and Elkford have all had deer culls. St. Clair notes that mule deer, in particular, have shown a tendency to become aggressive in urban environments as their natural behaviour is to stand down and even stomp creatures that threaten them, especially when they have offspring.

Food conditioning is undoubtedly occurring with the deer on the Edmonton Ethane Extraction Plant land, though the degree is undetermined so far. While the employees of the plant may limit the amount of supplementary food they are providing the deer, it’s hard to know how much they are getting from residents and the nearby canola field.

Given the longevity of the deer in the EEEP area and their apparent health and lack of interaction with humans, the situation seems sustainable for now. But people tend to underestimate the long ecological effect of feeding wildlife, St. Clair notes. “It is never a sustainable thing. It always ends up causing problems. They can take a long time to occur, though — and the fact that that site is fenced, with the fence usually closed, is maybe one reason that it’s been sustainable for as long as it has.”

Despite the risk of food conditioning whenever humans live alongside wildlife, St. Clair notes that it’s important to have a city that’s rich with animal life. Therefore, it’s vital that we find ways to minimize the conflicts between humans and wildlife as both our cities and population expands. “It’s nice for people — it’s an aesthetically very valued thing — but it’s also good ecologically,” St. Clair says. “All of these different species, they provide ecosystem services that makes a city a healthier place for all of us.”